Intel’s upcoming 12th Gen Alder Lake-HX CPU lineup for enthusiast workstations & gaming laptops has leaked out over at Videocardz. The lineup includes various SKUs which are aimed at the fastest laptops for content creators and gamers.

The Alder Lake-HX lineup is Intel bringing the desktop 12th Gen dies to the laptop segment in a BGA form factor. For this purpose alone, Intel will be using the Alder Lake ‘C0’ die which rocks a total of 8 P-Cores and 8 E-Cores. These chips will come in the same package size as the desktop parts which are 45 x 37.5mm but have been thinned out to reduce the height from 4.4mm, down to 2.0mm.

Since these are based on the same silicon as the desktop parts, one should also expect similar core count, cache sizes, and clock speeds. One major feature is that Intel’s Alder Lake-HX CPUs are going to be the first PCIe Gen 5.0 platform for laptops, featuring a total of 48 PCIe lanes. These comprise 16 PCIe Gen 5, 20 PCIe Gen 4, and 12 PCIe Gen 3. As one would guess, these would allow for better I/O capabilities than the existing Alder Lake-H lineup which only offers 28 PCIe lanes which include 16 Gen 4 and 12 Gen 3. 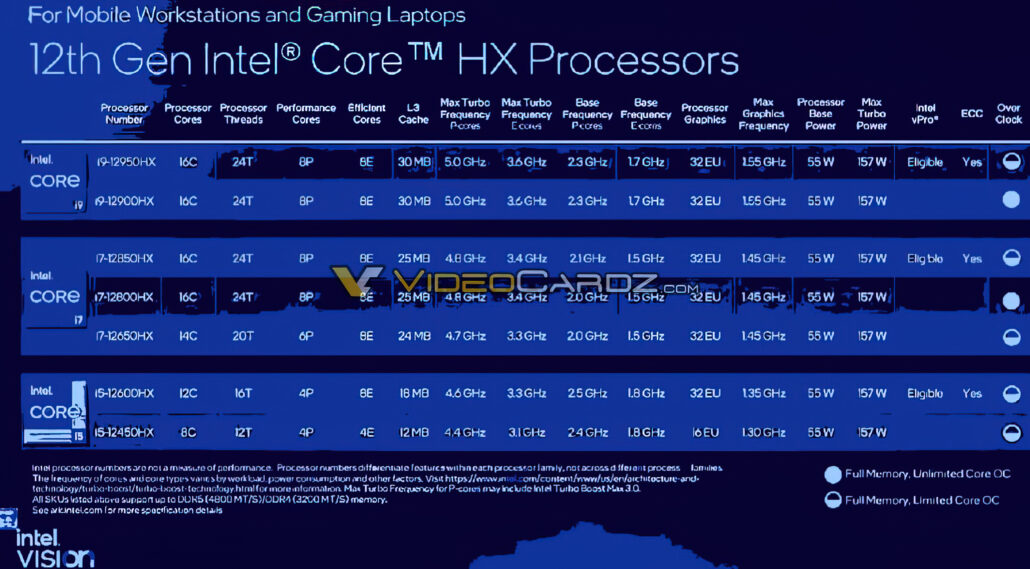 As for the other significant feature of the Intel Alder Lake-HX lineup, we are looking at full overclock support for both the CPU and DDR5 memory. These will be made possible through an updated ETU (Extreme Tuning Utility) while XMP 3.0 profiles will be available across a wide range of mobility HX platforms.

Finally, let’s talk SKUs, there are 7 in total which starts from 8 cores and goes all the way up to 16 cores. There’s not a single SKU that doesn’t feature E-cores enabled on die. What’s really interesting is that certain top-tier SKUs in each segment are ECC and vPRO compliant while the 2nd tier SKUs offer full memory and unlimited core overclocks while the rest feature limited core OC.

Lastly, we have the entry-level Intel Alder Lake-HX Core i5 segment which includes the 12 core i5-12600HX (4+8) and the 8 core i5-12450HX (4+4). These CPUs feature 18 MB and 12 MB cache and the clocks are rated up to 4.6 / 4.4 GHz, respectively. The only department where these chips lack against the Alder Lake-H lineup is the 32-16 EU iGPU which is similar to the desktop parts. We can expect these chips to land in several laptops in the coming months leading to Computex 2022 & a formal announcement is expected at Inte’s Vision Event next week.